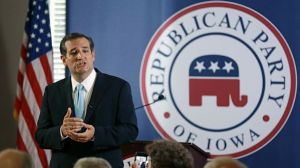 Resembling nothing so much as the limpid, photo-negative version of Frank Underwood’s rigor and ruthlessness, the presidential campaign of Texas Senator Ted Cruz has, thus far, been a rather hapless affair. And that may be putting it mildly.

The Senator announced his candidacy for the nation’s highest office mere days ago, and already his electoral enterprise has been plagued with problems. The first and most elementary among them: It seems as though nobody on Cruz’s brand management team thought to buy up all the online domains associated with his name. Thus, a visit to TedCruz.com—snapped up by, one assumes, a more tech-savvy and brand-aware Democrat—offers a simple message: SUPPORT PRESIDENT OBAMA, IMMIGRATION REFORM NOW!

Little better, at least from the Senator’s standpoint: TedCruzForAmerica.com redirects straight to healthcare.gov, the signature domestic achievement of President Obama that Cruz has campaigned against so vigorously.

But a failure to buy up his online domains is, it turns out, just one of Cruz’s many campaign problems (not including a general sense that his candidacy falls somewhere between a pipe dream and a farce). The candidate was met with merciless mockery on Twitter, with a wildly popular #TedCruzCampaignSlogans putting him through the ringer. (“For a whiter tomorrow” is our favorite.)

You could point to other campaign decisions of dubious merit, many of them technical—for a while, the official Ted Cruz website had an unencrypted donations page, opening up all campaign donors to cyber attacks—but perhaps the big finish for Cruz’s rocky campaign rollout was the announcement, made the day after he announced his candidacy, that the candidate himself was signing up for Obamacare, the very federal program he has attacked so aggressively for so long.

Of course, Cruz’s decisions about his family’s healthcare are ultimately his business, but this points to a larger issue—namely, a certain fecklessness in cultivating his own positive online image. Simply put, it seems as though there is no one, or at least no one competent, advising Cruz on how to convey a strong message and protect himself from attack when running a campaign in the social media age.

A smart brand manager would have bought up all domain names associated with Ted Cruz; and while Twitter attacks are par for the course in politics, more could be done to combat them and control them, using a more coherent social media platform.

Social media and content marketing provide politicians—like companies—with the ability to shape their own narrative and to control their story and its perceptions. Perhaps other presidential hopefuls will learn from Ted Cruz’s bizarre saga and exert greater mastery over these disciplines.

To learn more about Grammar Chic’s own brand management and content marketing offerings, call us today at 803-831-7444, or visit www.grammarchic.net.